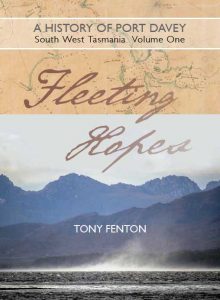 Port Davey, in Tasmania’s rugged South West corner, is roadless even today. Such a wild and rain-drenched landscape suggests an untrodden past, yet Tony Fenton has unearthed stories of human hopes and schemes, courage and determination, folly, avarice and downright hard work in an inhospitable place. A lost history, that of the Aboriginal people of the South West, is glimpsed from George Augustus Robinson’s diaries as he made his persuasive journey into their country. Explorers, whalers and track-cutters came and went. The Huon pine industry brought families to settle at Port Davey, and prospectors trod the soil hunting for gold and other minerals. Sailors were washed ashore on an uninhabited coast and search parties endeavoured to find them.

A few ventured to Port Davey out of sheer curiosity. Some found the vista forbidding, even ‘repulsive…cheerless and solitary’. Others, like the playwright David Burn, appreciated its grandeur: ‘Nature in untarnished, primeval majesty reigns here supreme, whilst man looks on to wonder and adore’.

Tony Fenton has woven ground-breaking research into a well-structured and intriguing narrative that reveals an unexpected past alive with people and plans, set in an impressive but unforgiving landscape.

This book was published with the generous support of Arts Tasmania, Dick Smith Foods and many individuals who responded to a crowdfunding campaign. A big thankyou to all contributors.